From the My Account page, you can manage your account information, manage your addresses, view orders, manage subscriptions, view your accrued boldREWARDS, and update your payment methods.

A Message of Hope (+ COVID-19 INFORMATION) 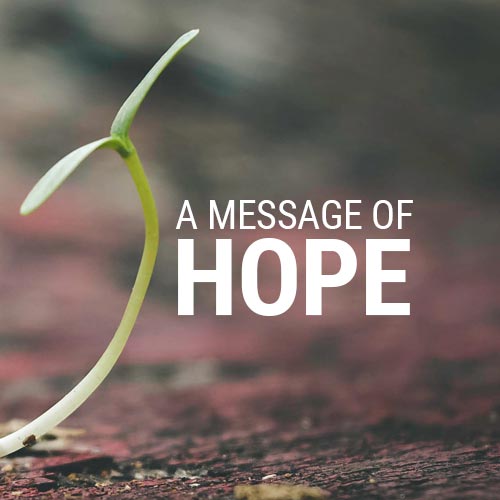 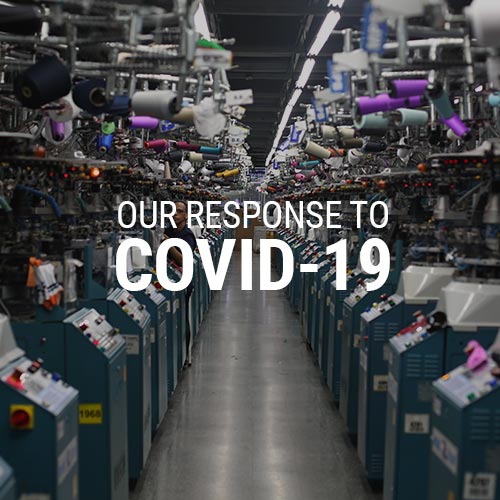 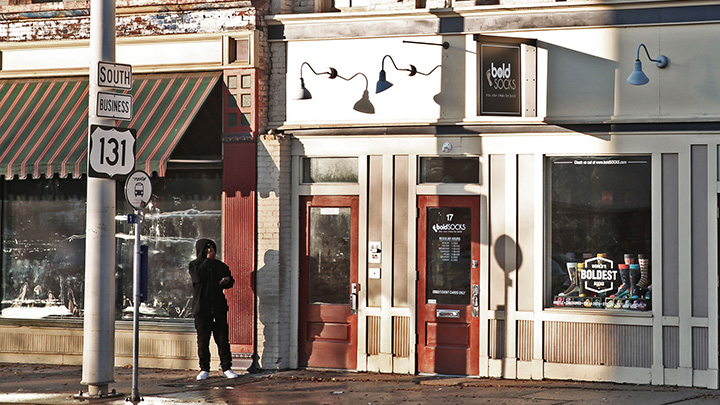 Located on South Division in Grand Rapids, Michigan, we are in the heart of what Expedia apparently called a “super cool city” and we think that’s super fantastic. We love our downtown digs, with many of us walking or biking to come do awesome work every day. boldSOCKS occupies one of the oldest two-story brick buildings in Grand Rapids. Built in 1875, the building was originally a toll station for travelers who were using the new and very popular plank roads. The roads were so new and nice that the travelers weren’t allowed to wear shoes on them, just socks. Thus, the invention of boldSOCKS. Fine, that last part was a lie but we think everything else is true. Either way, many soles have passed through this building, and almost all of them have left. If you’re in the area, stop in to say hello, see our sock showroom, and meet the team and the ghosts in the basement. 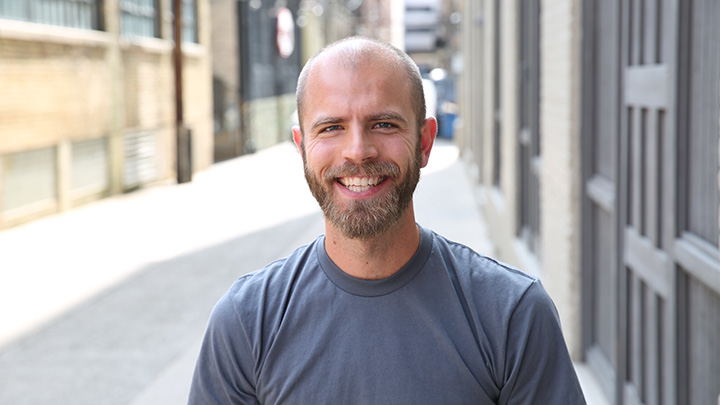 Ryan is one of the original founders of boldSOCKS. His alter ego’s name is Harold and Harold is the ultimate embracer of all things fun, especially when it comes to holiday staff games. Ryan’s idea of fun includes creating insane inventory systems for boldSOCKS and hammering out rocks from the 100+ year old wall of our basement. Ryan is so anti-mainstream that he has no idea how mainstream he actually is. He fends off daily, and sometimes badgering, requests from the residents of Portland, Oregon, for him to come join them as they spend time not being on social media and brewing kombucha. He dreams up new smoothie recipes for the staff to try and often is the only reason that most of us consume fruits or vegetables once a week. He is a proud father to Breckin, 7, Greydin, 6, Emberlynn, 5, and his beard, 13 months old. 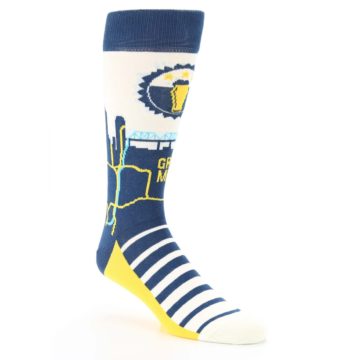 These are Ryan's favorite socks because he believes that it doesn't get much better than Michigan (sans winter) and we have the best beer (says some award Grand Rapids won and Ryan's taste buds).

Get the Solid Look! 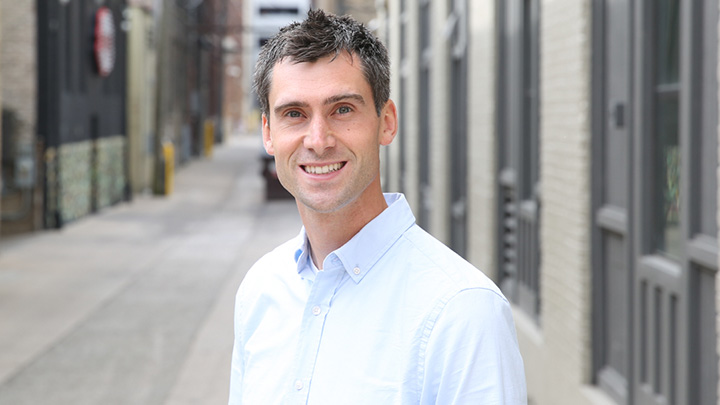 Ryan is here for a good time. Actually though, Ryan’s passion is doing good in this world. Whether it’s through ensuring a vertical, ethical manufacturing supply chain, creating a way for boldSOCKS to supply over 30 million days of clean water in Africa, or simply developing Northside Happy Hour, a way for his neighborhood to connect each month, Ryan is driven by creating a positive, lasting impact on this world. Ryan oversees the creative and strategic development of the company and casts the long-term vision. When he’s not buried in socks, planning how to make the world better or raving about Peppino’s cheesy bread, you can find Ryan with his wife, Brooke, and their two children biking, hiking, camping, climbing, barbecuing or doing any outside activity. 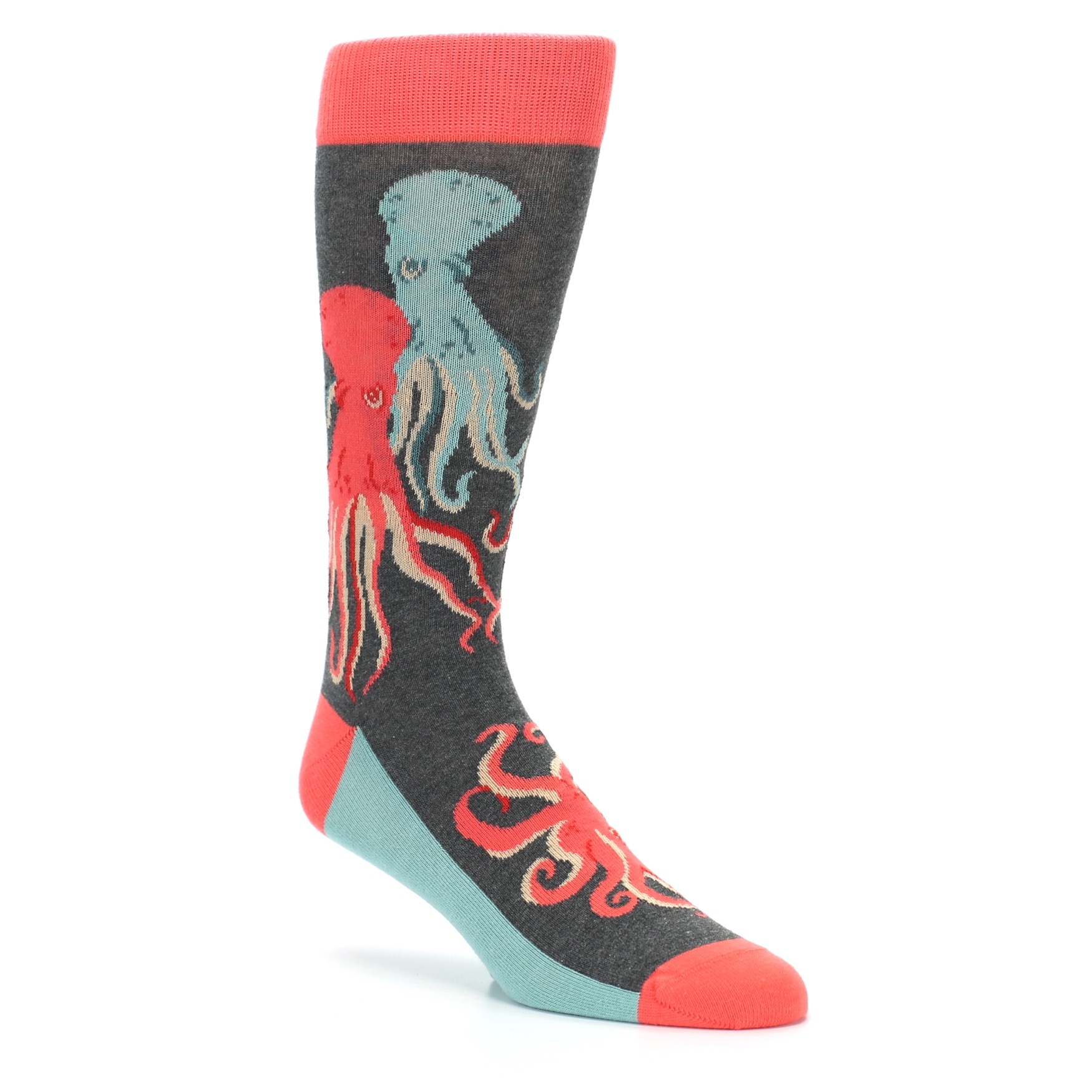 Ryan shines really brightly when he gets to wear his Octopus Socks because they were the very first pair that his son, at 2 years old, thought were cool, officially making Ryan not just a normal dad, but a cool dad. 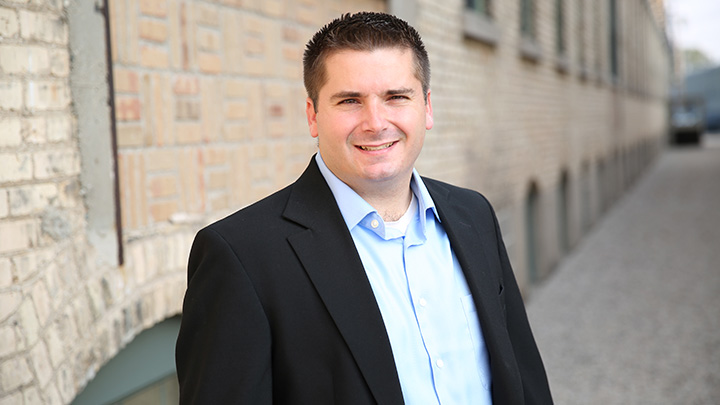 Once described as “THE tech-genius of our time”, Eric can do just about anything in 30 minutes or less. He once let Steve Jobs copy his notes for what was soon-to-be the first-ever iPhone, but isn’t mad about it because he prefers flannels to turtle necks and he definitely prefers cool socks over iPhones. Plagued by odd numbers, multiple-sneeze attacks and telemarketer phone calls, Eric persists through it all and still manages to develop any sort of technical application or wish we come up with by 5pm that same day. He’s also often looked to for intricate answers regarding how the world works and all of us (including Eric) aren’t sure whether or not he actually is one of the ghosts occupying our basement. When he’s not solving everyone’s problems, Eric is shredding the ice at the local hockey rink or spending time with his wife, Danielle, and their son, Brayden. 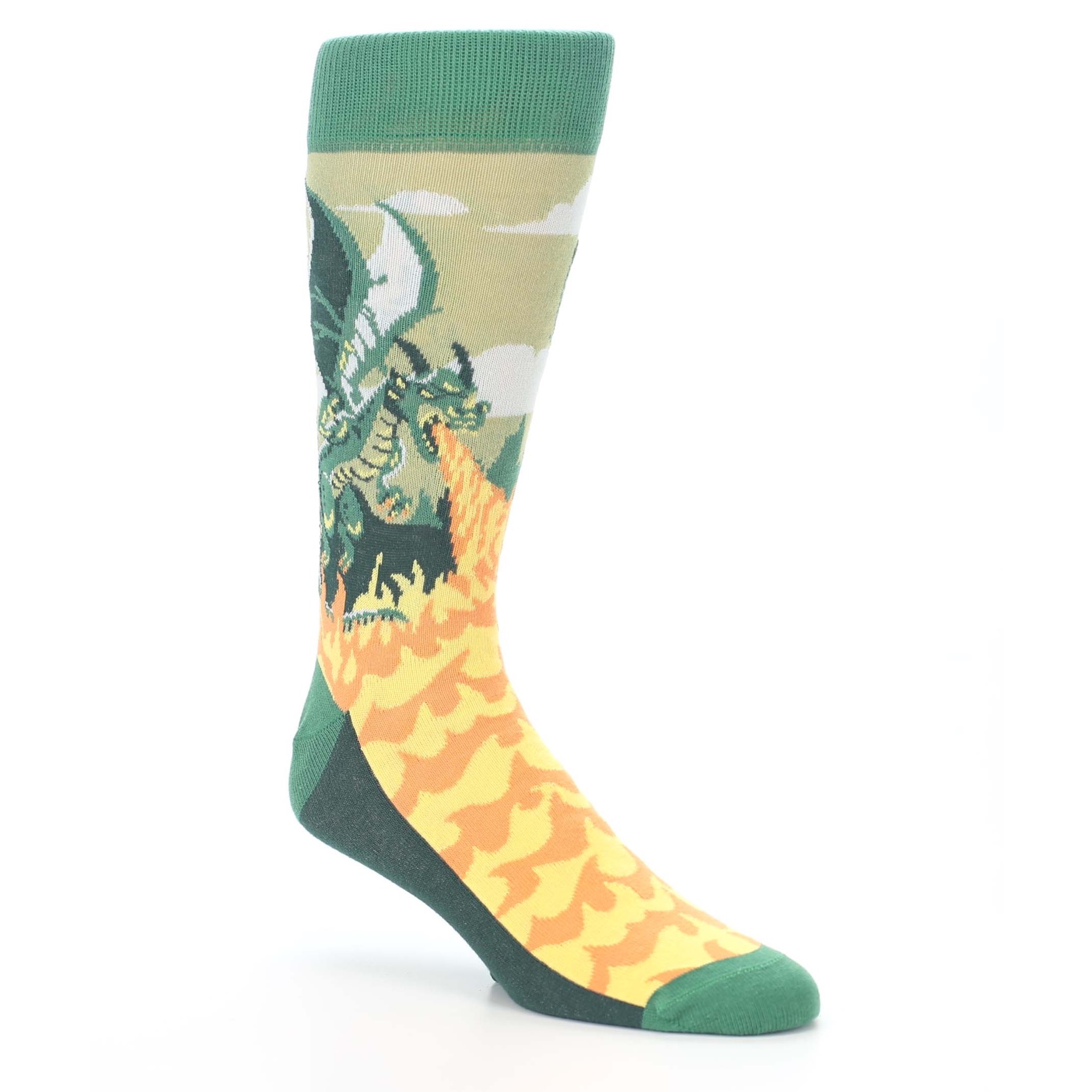 The toughest task Eric has ever completed at boldSOCKS was identifying his favorite pair of socks. Eventually, Eric settled on the Green Dragon Blowing Fire socks, because dragon. 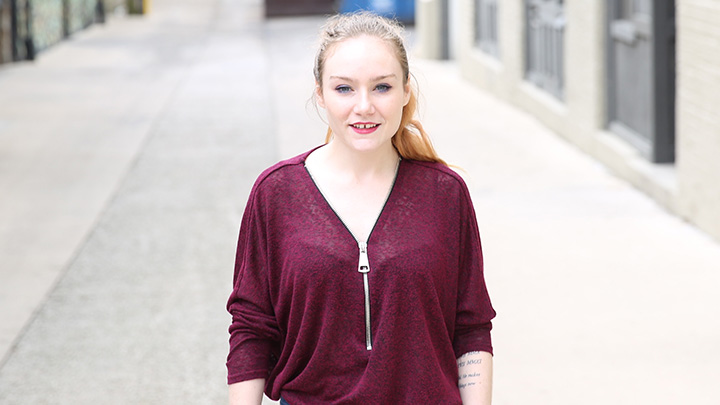 One of ten children, Autumn enjoys recounting vivid details of her wild dreams to the staff, caring for her cats and trying to get rid of the one she accidentally took in. (Seriously, does anyone want a cat?) Photographer, videographer, music producer, rapper, model, painter, writer, dancer… Autumn has yet to find a creative hobby she doesn’t naturally pick up. Autumn applied for this position at boldSOCKS three times before she finally got an interview. After getting hired, Autumn immediately almost got fired for what she describes as having a little too much “spunk”. After a lot of hard work and a lot of patience from Autumn and the team, Autumn was able to settle into her role and now is boldSOCKS’ longest-standing employee. She knows how to do pretty much everything at boldSOCKS and is the reason you get your custom printed socks so quickly. 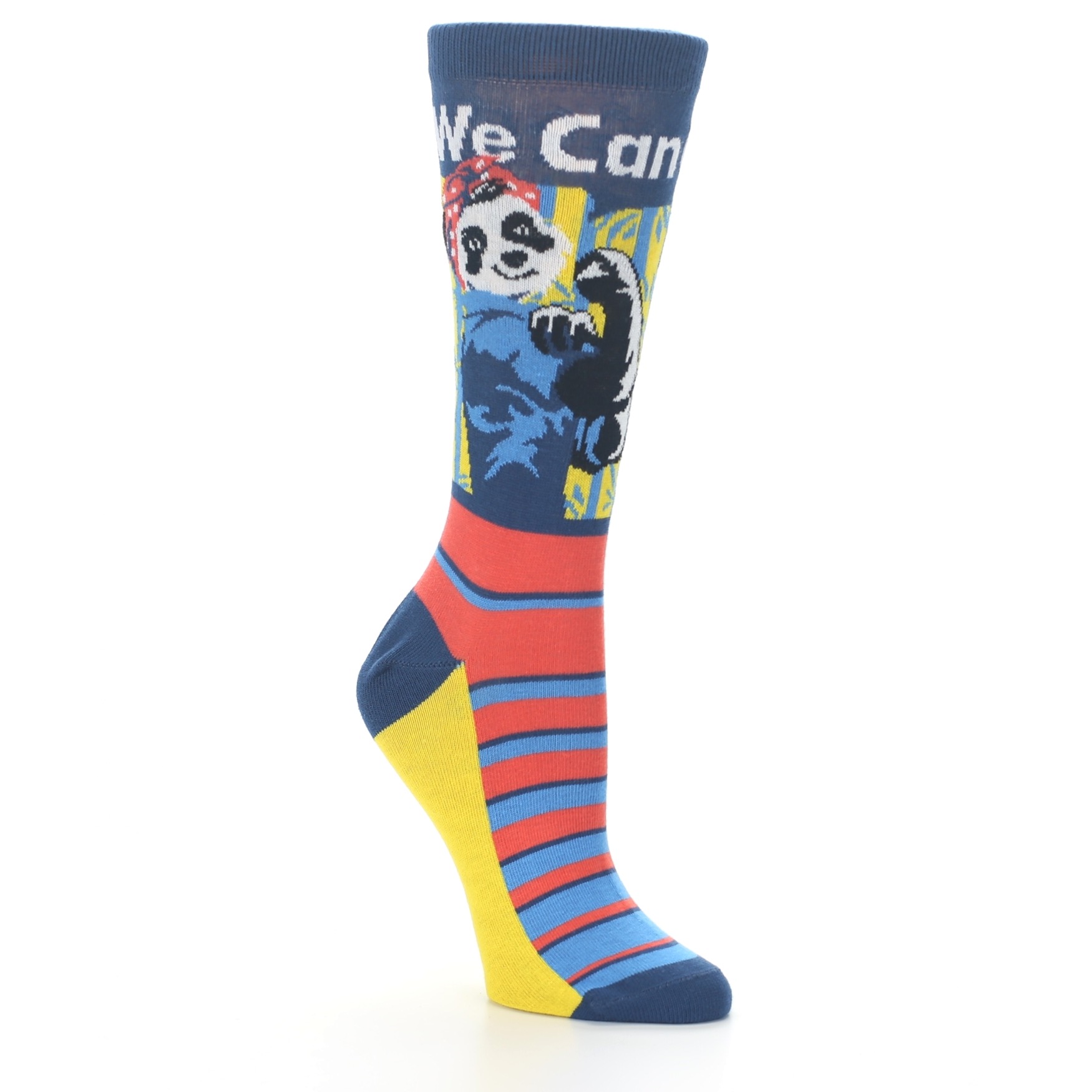 Favorite Pair of Socks: We Can Chew It Propopanda Socks

Autumn loves these empowering socks and helped design them, but she swears she isn't biased at all. 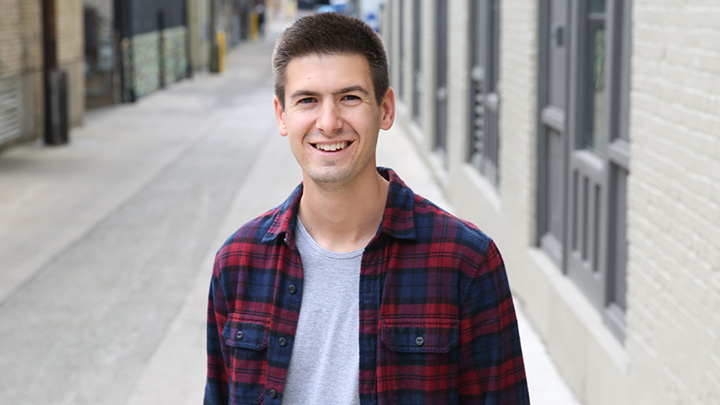 A direct descendant of Pablo Picasso, Micah frequently stays awake at night worrying that he might be over shadowing his great great great grandfather’s work with his sock designs. An Iowan Native and an unassuming lover of rap, Micah keeps everyone on their toes during “Office Playlist Hour”. It’s tough for him to look at fun socks without thinking how he would’ve designed them better, but he is able to put this aside for weekly Veldkamp dinners with his long lost relatives. He is the reigning champ of the “longest stride” competition at boldSOCKS, and also holds the title of Intramural King at Calvin College for his participation in soccer, basketball, volleyball, and flag football. Despite his athletic prowess, Micah refuses to  play sports that require a stick.

He listened to 92,280 minutes of music last year, and we are assuming it definitely wasn’t to tune us out. Micah studied abroad in Budapest, and once almost got arrested in China for boldSOCKS. You’ll find Micah out on the town in what he describes as a “roomy convertible” in one of his 40 pairs of crazy sneakers.

A big fan of just chillin, Micah feels that these socks speak to him on a very personal level. "Besides great-looking colors, this guy epitomizes what I aspire to be -- carefree, relaxed and cool (literally).” 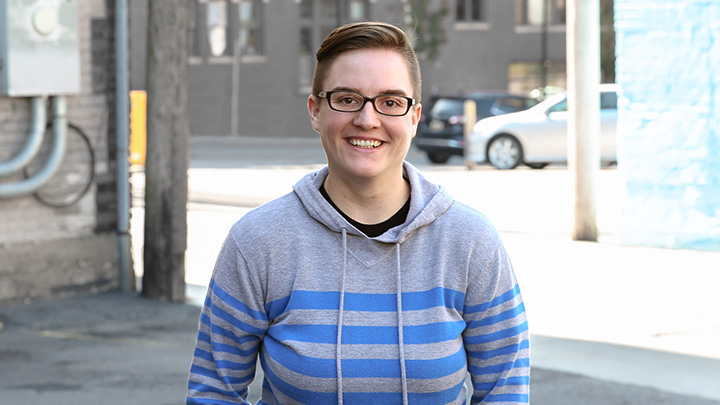 There was only one person who didn’t like CJ, and that was only for .2 seconds on the playground when CJ was 5-years-old. CJ has a matching pair of socks for every shirt she owns, but she still manages to forget to use her donut coffee mug when someone brings in donuts.

A die-hard Red Sox fan, CJ has visited 12 different major league baseball parks across the country. She only drinks cold liquids and won’t even be tempted by a hot coffee during the -20 degree days our Michigan winter brings. The 226 lucky individuals who follow CJ on Instagram get a taste of her love for music, memes, inspirational quotes and, of course, boldSOCKS. 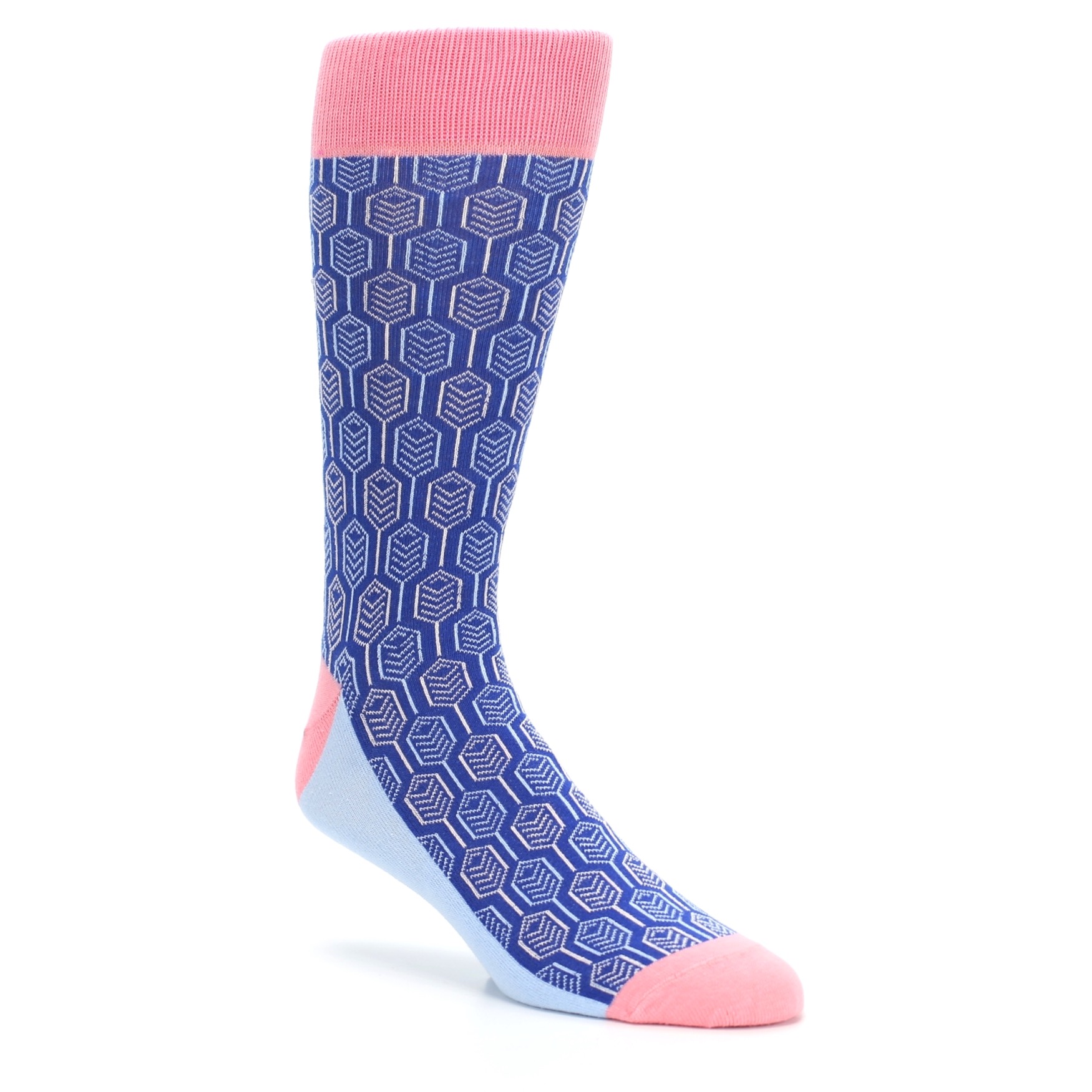 Favorite Pair of Socks: Feather Optics, Any Color But Mint

CJ took the opportunity to share her favorite pair of socks as an opportunity to publicly blast a color she doesn't like. We don't offer Feather Optics Socks in mint.

"Feather optics are my favorite because 1) they're more fun than your typical argyle, polka dots, or stripe patterns, but still classy 2) So far, they're the most comfortable pair of Statement Sockwear that I have. My favorite favorite is pink blue, because they go with a lot of my wardrobe. I know there's no mint, but I didn't know if you wanted to share with the world how much I loathe the color mint." 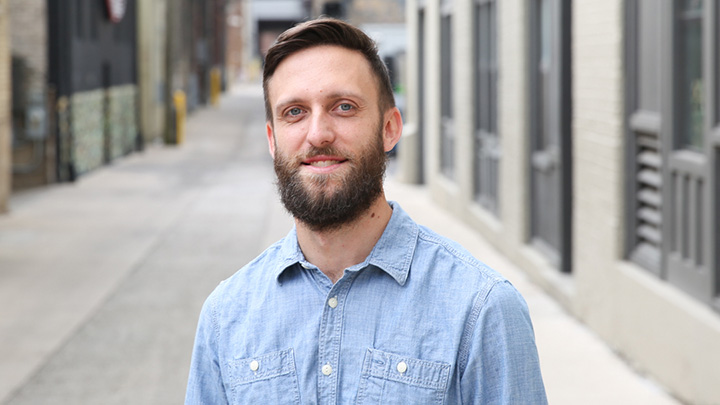 Eric’s Instagram believes he is a 22-year-old woman based on the accounts he follows, but Eric is just a cool guy who is really into home design. Nobody knows how to say or spell his last name, so we call him Kaz. When he’s not at boldSOCKS, you’ll find him happily working on his house and doing woodwork. He has a wife, Garland, and two Boxers who got demoted from his “babies” to just regular dogs when his daughter Charlotte was born. Eric works in operations for boldSOCKS and goes out of his way not to draw attention to himself. 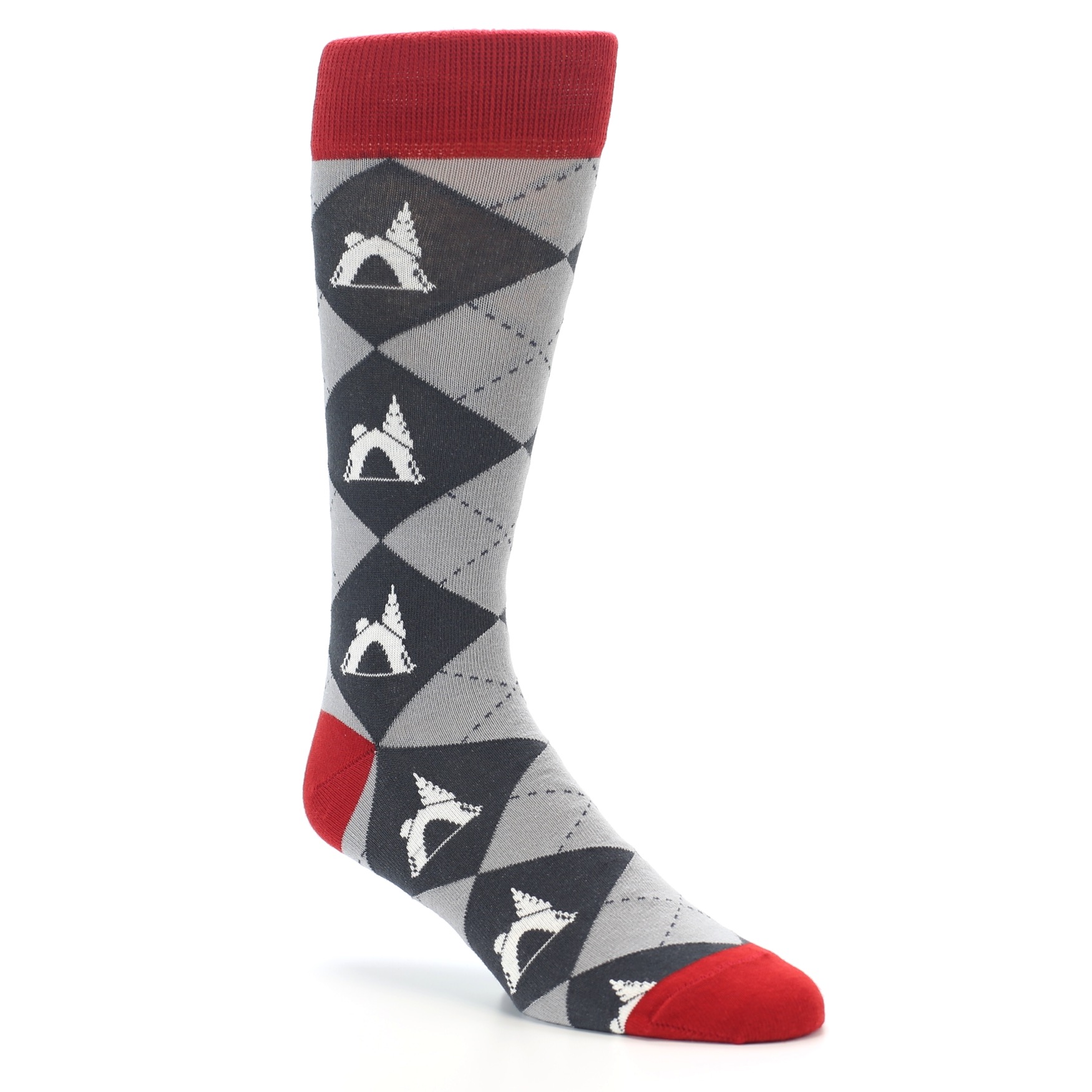 Eric has a soft spot in his heart for these socks because he wore them on his wedding day. 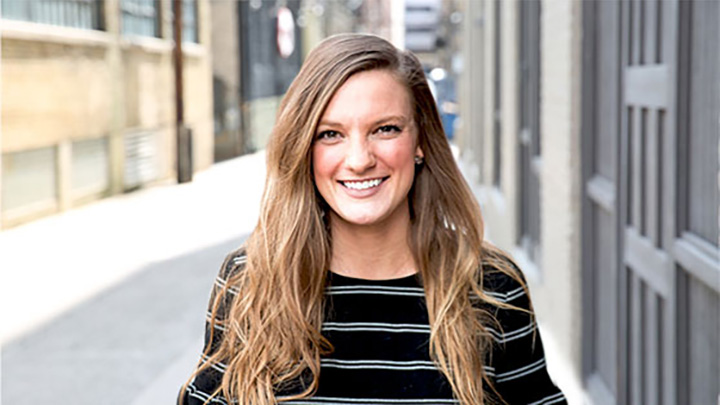 Writer, creator and pop culture consumer, Sarah set her dreams of going on the Bachelor and turning into an Instagram influencer aside to join the boldSOCKS team and work in all things content. Sarah writes descriptions, dreams up and creates Pulitzer-prize-worthy blog posts, and infuses keywords into everything (even this) to increase our SEO. She is also the head and sole member of the Party Planning Committee at boldSOCKS. The committee is invite-only, so please hold all requests. Outside of work, you’ll find her hanging out with her fam, redoing old furniture, trying a weird beauty trend she found online or catching a barre class at Beer City Barre. 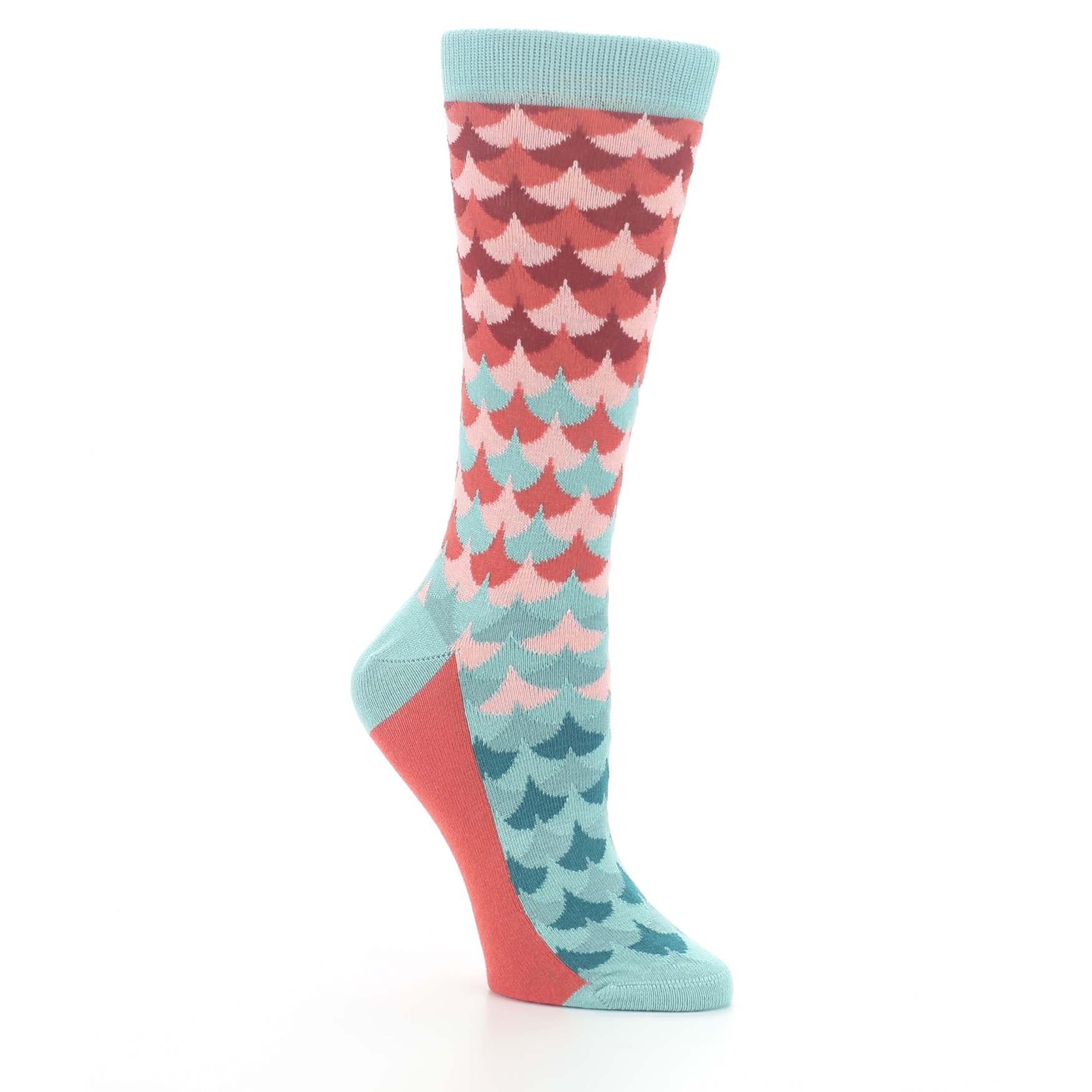 Continuously scheming to run off to the beach every day of the summer, Sarah will be wearing these until Mac makes a sand-proof laptop and the beach gets WiFi. 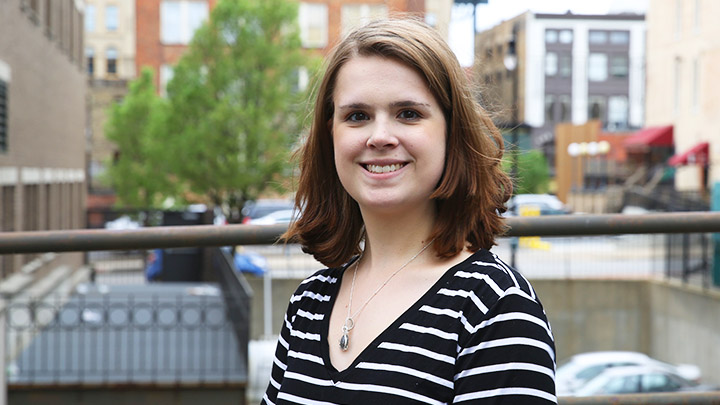 Stop motion animator and fabricator, Sarah brings a very cool and unique talent to the boldSOCKS team. Originally from Saline, Michigan, Sarah attended Savannah College of Art and Design where she studied abroad in Hong Kong. For fun, Sarah binge watches Ru Paul’s Drag Race (season six is her favorite) and tends to the nine animals at her parents’ house: one cat, two dogs, four birds and two geckos. She describes herself as an only child living on a late with too many animals. Sarah’s dreams and career will most likely take her to LA, New York or Japan (only if she can bring her animals) and she hopes to use her talents and skills to create commercials. If Sarah wasn’t doing animation, she would be working at a bird sanctuary in Tampa, Florida. 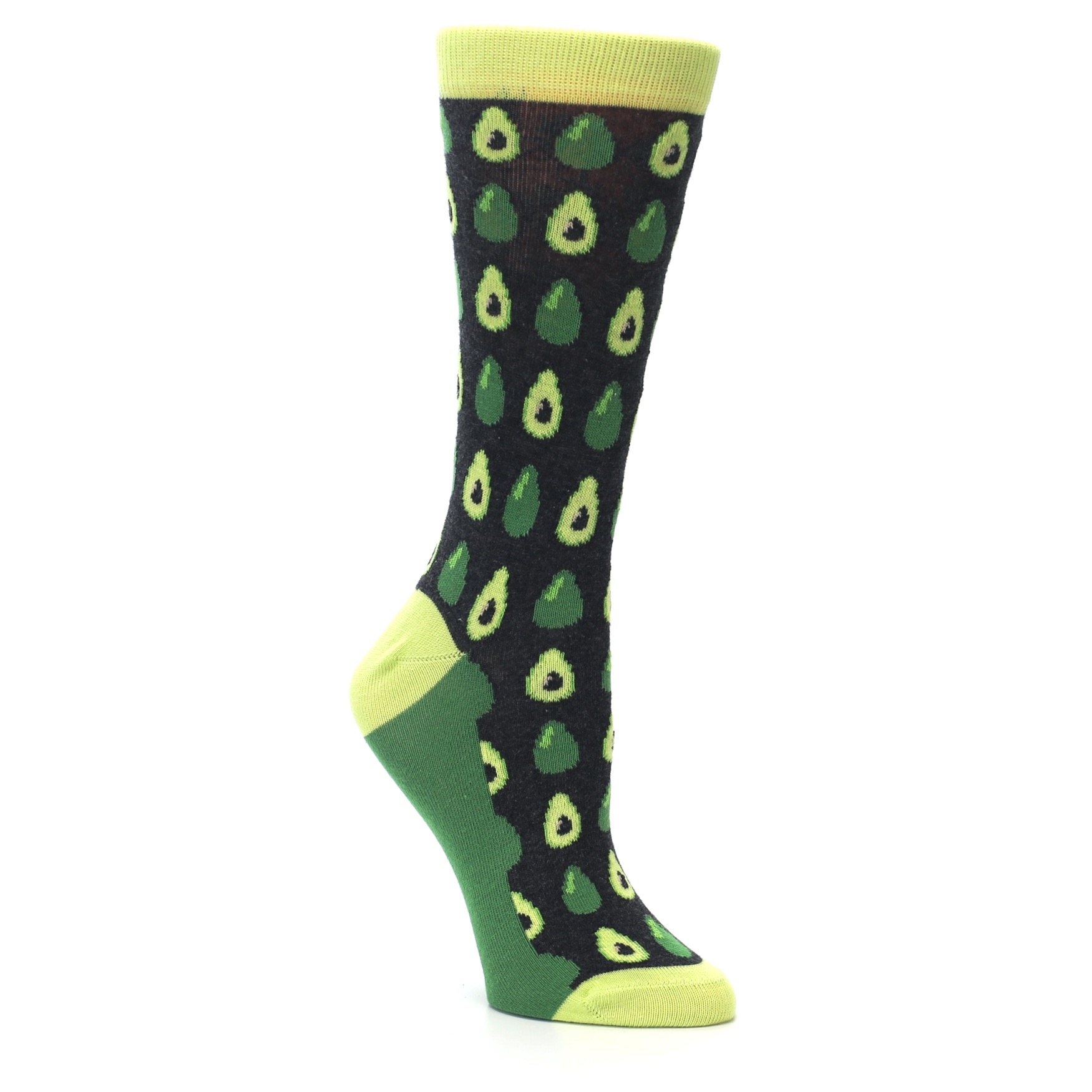 The colors of these socks lend themselves to just about everything in Sarah's wardrobe and they portray a treat that Sarah finds very tasty. Combined with the cute pattern of halves and wholes, these socks have Sarah's whole heart.

SPIN TO WIN UP TO

Plus, receive information about deals, news, and new arrivals.

Round and round it goes, where it stops, nobody knows...

Congratulations, here's a 10% off code!

Use this code at checkout:

(You will also receive a copy in your email.)

Hurry, this code expires in 24 hours!


Sorry, you've already spun the wheel for signing up. This offer is limited to one spin per user.


This offer is limited to one spin per user.

Questions? Contact us anytime at support@boldsocks.com or leave a message and we'll promptly reply via email during standard business hours (Mon-Fri 8am-4pm EST)

We want you to love your socks, no matter what. If you have any problems with your order, let us know and we will take care of you and your return. See entire return policy.